in this blogpost I’ll summarize all changes 8.1 will bring to our spec. This post however won’t be a guide to how to play. So please read the actual guide pages for that.

Time to dig in.

Some more consistency for our spells. Offensive utility spells still have 30y range.

Some more consistency for our spells. Offensive utility spells still have 30y range.

Side note: The spellpower coefficient change you might’ve seen is just the application of a live hotfix to the base spell. Resulting in no change overall.

Side note: Changes you might’ve seen about the CD becoming a recharge has no effect whatsoever for us. Thus our base CD is unchanged.

We can finally use Ascendance without having to refresh Flame Shock right before going into the CD. And we no longer have to wait for the CD of Flame Shock to finish at the beginning of the fight, but can actually just head into Ascendance. But should we use Ascendance? Check out the guide!

Side note: While datamining showed a spellpower coefficient change in the tooltip, this change only ensured that each damage tick remains as strong as with the 18 seconds duration. Therefore Flame Shock will provide the same DPS but lasts longer, which of course frees up a global cooldown here and there, which adds up over time.

This means that we can actually open the fight with a precasted Lava Burst, followed by Flame Shock on pull, to still ensure a 100% crit of Lava Burst. We can now switch targets one cast earlier than before.

As slanderman mentioned before, this indirectly buffs Totem Mastery, Storm Elemental, and Stormkeeper. Furthermore this strengthens our intended immobility, because our stand-still filler becomes more powerful than our movement filler (Frost Shock).

Side note: When Lightning Bolt is buffed but Lava Burst is left untouched, then it might change how we handle our priority list during Storm Elemental uptime. Check out the priority list page for more information regarding that.

New talent tree layout (selected column to enhance readability, this is not a suggestion): 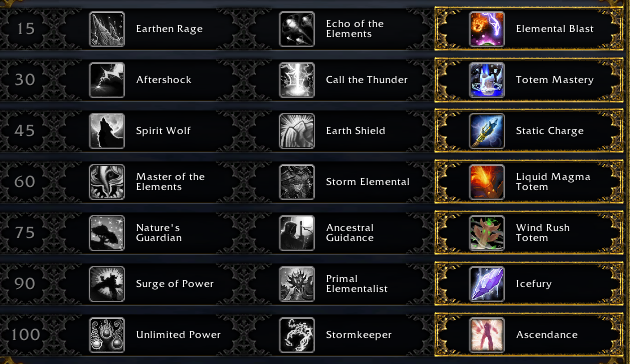 The following talent mentions are ordered by their position in the talent tree.

This means that this talent becomes slightly more powerful. However because our base cast Lightning Bolt got buffed, this talent suffers a loss overall.

Master of the Elements

However, we still don’t want to cast Lava Burst during heavy AoE (>= 4 targets).

We’re only interested in the Lightning Bolt and Lava Burst effects because we generally don’t want to cast Earth Shock during any form of multi target fights.

While this might sound fun, it’s actually pretty hard to gauge how much of a fight you’re actually at 100% life. If you have a pocket healer this trait might help, but even if you have, you’d still have ankh at most every 15 minutes. Which equals to every 2-3 tries. Is this good? No, you still can’t reliably incorporate it into your strategy.

Our new have once trait. 50 seconds Bloodlust/Heroism has been and will always be juicy. Because you usually use this ability when most necessary or valuable getting more consistent procs during that time is a nice addition, even though it’s still only Mastery. At least we can no longer accidentally overcap Mastery with this trait.

Side note: You might’ve seen some value increases in datamining. Those are just the application of a live hotfix we’ve had for quite some time now. The trait is not receiving any change in 8.1. Just its base effect is adjusted to the level of the hotfix.

Very powerful pure AoE trait. When stacking this you could actually replace Earth Shock in single target with Earthquake. But do you want to stack an AoE trait until you can get a very marginal single target gain, instead of just using a general trait that helps in all situations? Something for everyone themselves to decide. Anyway, if anyone wants to run a returning meme: stack this trait three times and use Earthquake in single target. - I wouldn’t be suprised to see some diminishing return being added to this trait soon, so meme while you can.

This sums up all the the actual changes. How these ripple into the actual gameplay, favoured talent combinations, and stats, check out in our guide pages.