For the sake of brevity here are the answers to these questions:

But why am I writing this text? Just a way to passive-aggressively rant without a predetermined goal? The answer is certainly a solid maybe.

What do all the questions above have in common? Curiosity! At least that’s what I hope they do. The dark alternative would be “the fear of missing out”. Missing out of optimal play. Which can either happen within a spec, but is not limited to that. It can also mean the fear to “play the wrong spec/class”. If this darkness is encroaching on you, hopefully you’ll find a calm moment to ask yourself…are you still enjoying what you’re doing? Or are you just fearfully running forward?

Speaking of fear, do you fear the vast amount of potential combinations overwhelming you? No? Lucky you. I do and here is why:

“But these are small numbers. What’s the issue?” Assuming that the APL covers all combinations. The obvious solution would be to “just simulate” all of aboves combinations. Let’s ignore Conduits for the sake of my sanity.

“That’s not too bad.” Is it? We would only know about patchwerk fights at that point. AoE simulations take at least twice as long. The race to world first would have a winner before we’d even know what to use for AoE.

But fret not. There is a straight forward solution in plain sight. Just…don’t sim’em all.

The advent of memes

And the aspect of the day? Memes. Welcome to the actual content of this post. In the context of this post a meme is a build with a specific fantasy as a goal behind it, which will certainly not perform well enough to be used outside of informed jokes. Or in other words, if I catch you advertising one of these as a real build, without warning people about their certain under-performance, I’ll have to revoke your Elemental Shaman license. Everyone has one, right? RIGHT?
I digress.

You’re Fire. With the flick of a finger (a slow flick…like a 2.5s flick) you set ablaze up to 5 targets and heal companions at the same time. Before you know it and roughly around the time your spread fire extinguishes you can once more enkindle everyone. Meanwhile your everburning Fire Elemental empowers your burns even further. And what is this? A fire spewer on a stick? Count me in! 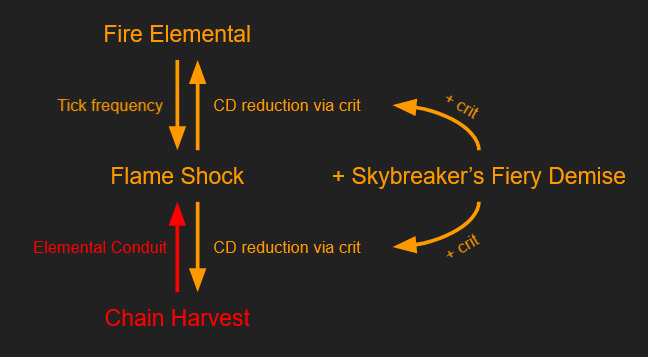 How to improve: Use Storm Elemental. It’ll serve your AoE needs better, but costs you some theme-points.

During AoE this build will add many critically hitting numbers to your screen. You’ll provide some off-healing and have a permanent Storm Elemental up even without T28 and without casting any Lava Burst.

Low target counts let this build crumble. Not having enough targets with active Flame Shock results in a long effective CD on Chain Harvest. Ignoring our Covenant ability for a second, when fighting only a few enemies T28 comes in clutch to make sure we keep Storm Elemental active, or get it back quickly.

The Shadowlands posed quite a few surprises for us. During the time we tried to recover our companions from Torghast we freed many tormented souls from their chains. It’s time to pick them up and bring the fight to the Jailer, as the Chainer. You’re casting chaining spells at enemies and friendly targets alike. You’re very consistent and reliable. Your enemies will fear the constant lightning strikes, while your buddies will receive constant watery love. The best part? You’ll be 100% mobile because everything you do are instant casts. You come in two flavors. One is explosive and the other has even more chains!

Chains of Devastation are the name of the game. Alternate between Chain Lightning and Chain Heal. As a Kyrian alternating between these casts will ensure you’re using all charges of your Vesper Totem and trigger both potential explosions of Raging Vesper Vortex. As a Venthyr you’ll incorporate Chain Harvest as the ultimate chaining spell into your repertoire. 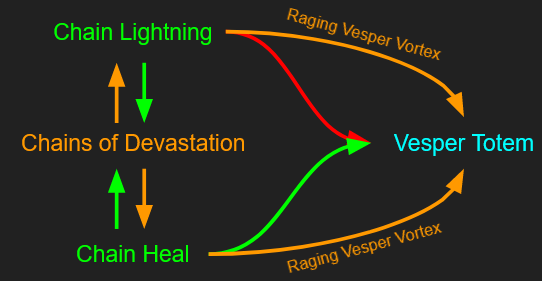 How to improve: Use the normal priority list to deal damage and ignore Chains of Devastation. It’s a meme for a reason.

Low target counts offer you the opportunity to pull more. If you can’t, you better hide. You’re worthless.

T28 is ignored in this build and has no effect.

Did you ever wonder how to express your hatred for your keyboard or your own fingers? Did you ever wonder how to be very special and make sure everyone notices it? This build presents an answer to both questions. You’re Lightning itself. And Lightning is lightning fast. The same applies to your casts. You’re constantly on the edge. Throwing Lightning twice per second at your enemies, just to coming to a full stop when dumping your accumulated resources. Until you lose all reason and ignore Maelstrom entirely. Which might happen. Soon.

The goal is pretty straight forward. Permanent Storm Elemental and therefore almost 100% uptime of 20 stacks of Wind Gust and benefitting from it as much as possible. How can we benefit more than usual from Wind Gust? Glad you ask. By stacking Mastery: Elemental Overload and haste. Because this implies we won’t be stacking crit. Which has a curious result: Lightning Bolt can deal more damage than Earth Shock. As Night Fae your Legendary Seeds of Rampant Growth helps with Storm Elemental uptime and still provides crit. Even though this build ignores this stat for gearing it’s still a powerful stat and a great addition. As Necrolord you have access to an empowered Flame Shock in the form of Primordial Wave and Splintered Elements provides even more haste. But you’ll struggle with Storm Elemental uptime if you’re not using Skybreaker’s Fiery Demise. So what happens if this build reaches its goal of 20 Wind Gust stacks? Lightning Bolt casttime is 0.5 seconds and deals more damage per second than Earth Shock. Do you remember what else has a 0.5 seconds CD? Let me tell you: Norgannon’s Sagacity. Therefore in its climax this build will only cast Flame Shock, Lava Burst with Lava Surge, and Lightning Bolt. Which are either instants or take 0.5 seconds to cast, which means that we can move 100% while casting. Welcome back Mists of Pandaria and Lightning Bolt on the move glyph. Another cool thing about this build: against 5 enemies, with enough Mastery: Elemental Overload Chain Lightning deals as much damage as Earthquake. Nice, only one button to spam during AoE!

How to improve: Diverting from stacking Mastery: Elemental Overload and haste and thus returning to normal priority lists would improve the performance, but this would no longer be a meme at this point.

This build deals with AoE worse than with single target, because while Flame Shock and Lava Burst are required for Storm Elemental uptime, they are a downgrade for actual AoE damage.

T28 helps to recover from screw-up and downtimes faster.

You’re unwell. Something about that feast recently was unbecoming. Since then you’re struggling with keeping it together. You’re trying, sure. But every time you’re seeing this Fire Elemental you’re feeling it in your stomach. It’s not helpful, that this damn Elemental is now permanently next to you. Oh boy, here we go aga…BUUUUURP: fiery balls fly towards your enemies. Others think you’re ascending. But you know the truth. You’re barely able to hold it together.

This build is all about meatballs. The more, the merrier. With a sprinkled in chance of getting even more meatballs. Necrolord provide some solid additional Lava Burst via Primordial Wave. Their temporary haste increase from Splintered Elements comes in handy for quicker Flame Shock ticks, resulting in a few more Lava Surge procs. The ultimate goal for this build is to be more efficient when waiting for Lava Burst than to cast Lightning Bolt. Very frequent Lava Surge procs make it possible. The usage of Deeply Rooted Elements is the core of our build. We’re rewarded for every Lava Burst with a chance to cast even more Lava Burst. 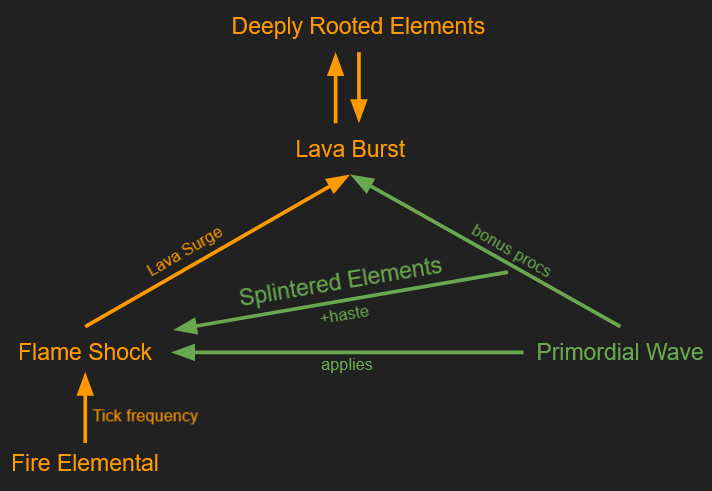 How to improve: Use Windspeaker’s Lava Resurgence instead. This one is a lot more consistent and provides movement globals.

During AoE this build is useless. We generally don’t want to cast Lava Burst during AoE, and Deeply Rooted Elements procs are next to useless without sufficient Flame Shock spread. And we can’t sufficiently spread it reliably.

Low target counts are exactly what this build wants. One to three targets are ideal.

And that’s it. These are all meme builds I expect to try in 9.2. Don’t take the rant too much to heart.